There are cows down on the beach. A herd of young heifers eating the seaweed. The girls are frightened and don’t want to venture any further. They’re big, one says. They want to eat us, says the other. No they’re just curious. Curious cows, keep walking and they’ll leave us alone. So we circumnavigate the beach of cows, moving cautiously past a large calf with emerging udders. She’s young, I say, that’s why she has such small udders, see? No, she’s not a bull, just a young cow. you don’t need to be afraid. One more thing not to be afraid of, in a world where I sometimes feel everything is something to be afraid of.

We leave the cows on the beach thinking as we leave them behind what a funny tableau they make, their presence on the rocks somehow wrong, as though they have strayed from where they should be. They have entered a world that doesn’t belong to them and they are out of place.

I wonder if they should be eating the seaweed, whether it helps them or will hurt them. the sheep on Fair Isle liked to eat the seaweed but it wasn’t good for them when they were carrying their lambs. It made a thick yellow mucus sack around the baby which clogged up their noses. Or at least I think that was the reason. I ponder the way my memory has started to cloud over details. There is so much to remember, so many thousands of things I have seen, so many thousands of things I have felt by now, that some things must need to be edited out. Sheep and the effect of seaweed on their unborn lambs seems to have been edited out. It’s not so useful to me to know.

We clamber down onto the soft round pebbles of the next cove and I marvel to see that there is a cow there too. I hear a loud clatter and turn to see another young cow stumble on the slippery rounded pebbles and fall onto her knees. She looks a little embarrassed and struggles to find her footing to get back up. I’m having the same problem. As I move, the pebbles slide smoothly under my sandals and I slide down towards the waterline. I quite like the feeling of losing my grip as I scrabble to compose my balance. I crouch down to feel the smooth stones in my hand. They are softened like suede somehow, not shiny and smooth but velvety and pleasing. I look for the roundest ones, the marble stones and close my palm around them. They feel good. I collect a fistful of them and then let them run across my hand and onto the other pebbles. There are no shells, no sand, just a depth of these smooth rounded stones.

Suddenly I come across a rock with the negatives of these forms scattered across its surface. I stroke my fingertips into the holes. they are perfect. Little inverted balls in the stone. I wonder how they came to be like that. Did the rock form itself around small creatures that have since eroded, was the rock perhaps hot, did it burn away the forms leaving the negative space, or was it at one point filled with small geodes of a softer rock that have been washed away by the salty water over time. There are tiny holes and then bigger holes, some filled with small pebbles that I cannot ease out. I enjoy the contrast between the rounded solid pebbles and their invisible counterparts and turn the big stones over to see that it is the same on the other side. I have never found any fossils on the beaches here. I wonder if there is a sort of fossil structure here in the regular holes in my rock before moving away. Intrusive Clams, maybe habitual Limpets, are probably to blame, boring their way onto the rock and hiding in the little hollows they make. 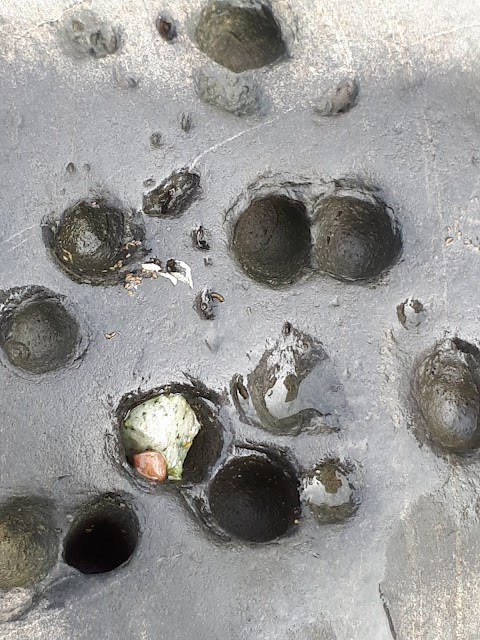 There are large boulders in this cove and they create narrow little tunnels with pebble floors that you can walk through, rock either side, the sky overhead and the round stones underfoot. I am surprised to find that I remember this particular boulder and the passageway that leads to other larger stone crevices. It’s familiarity seems strange as I know that it opens out into a little clearing that is really good for shells. And sure enough the floor is scattered here with lovely limpet shells - china limpet, blue rayed limpet, the common limpet, black footed limpets with their neat dark rims. My favourite are the blue rayed limpets which I look for every time I am on a beach. The blue rays fade when they die, or when they’re out of the water for too long but the shape is still enticing. A smooth rounded dome with rings of subtle colours smoothed into the surface. I find just two and slip them into my pocket.

The large boulders become part of the edge of the fields lining the beaches and so we climb first onto the hard rock and then up onto the sandy, earthy, then grassy terraces. The sun has come out, hot, unnoticed. On the way back to the car I feel the back of my neck and realise that it’s tingling with burn. I hold my hand over the heat and we make our way back across the fields. 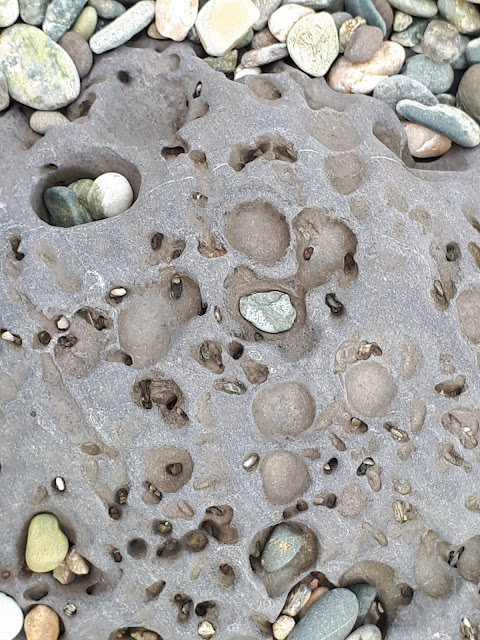 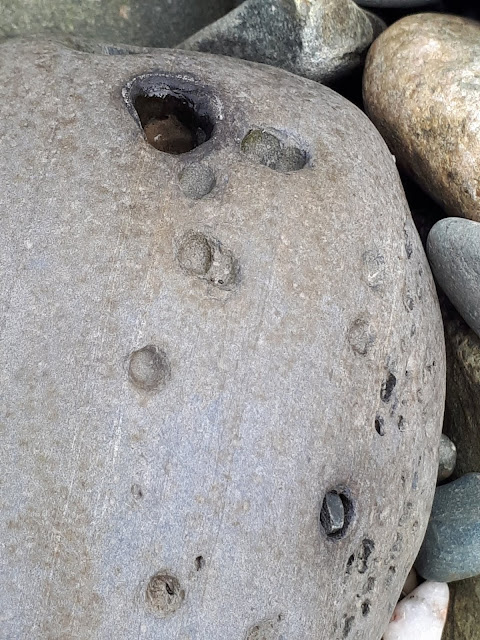 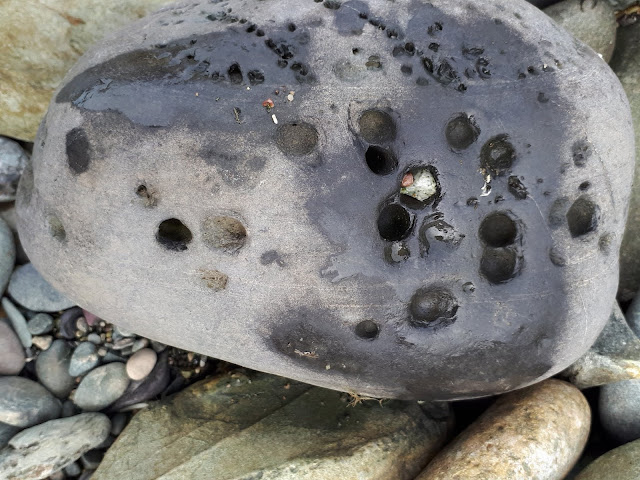 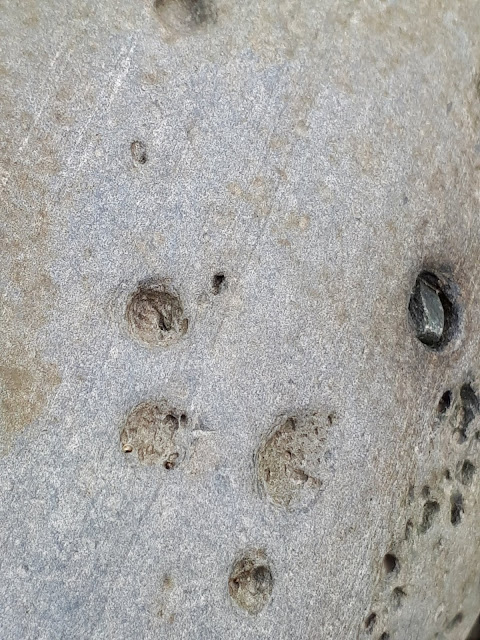 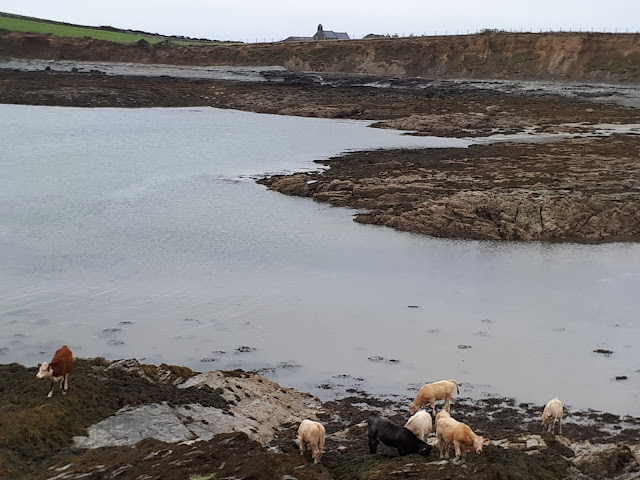 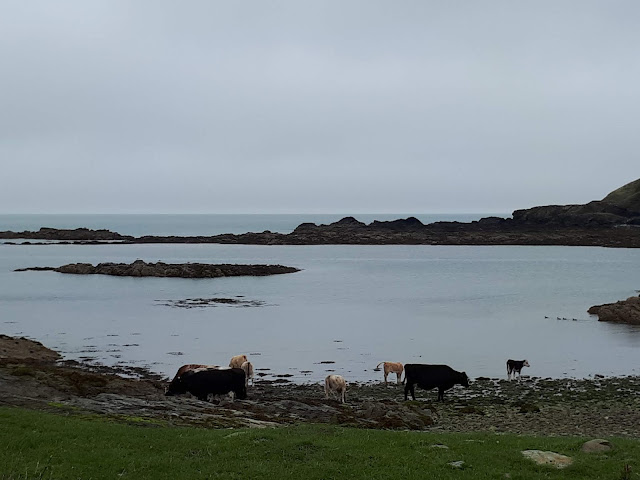 Kathryn was with the Gremlins at Cemlyn 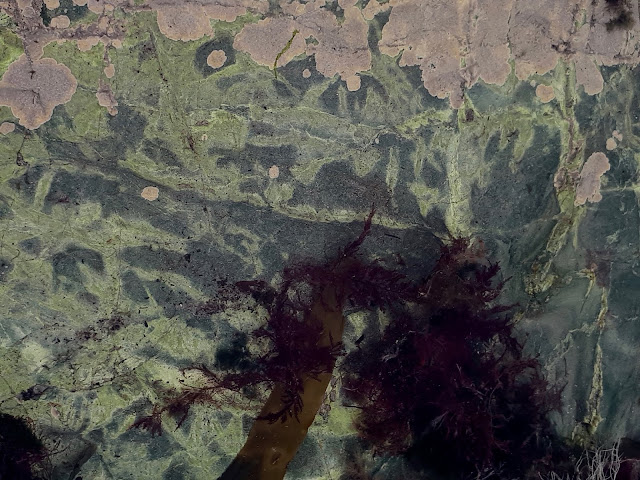 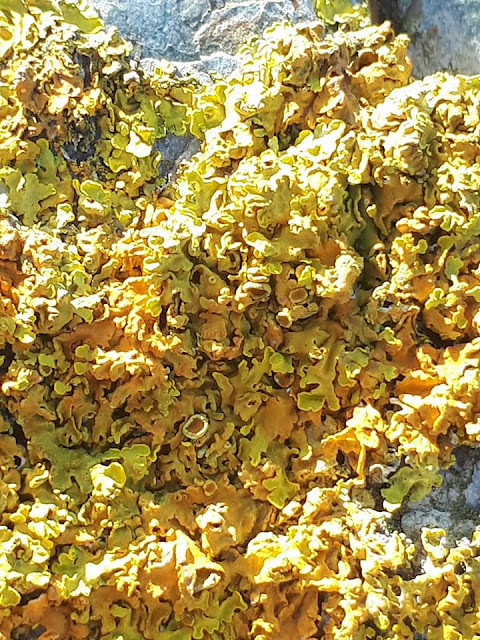